A history of bitcoin mining, from the first block mined to the present day, in economic terms. 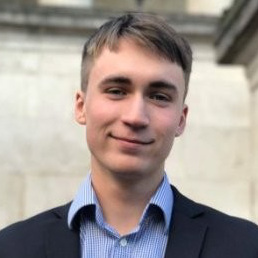 The history of bitcoin mining is well documented. Many extended discussions have charted the progressions of nearly every conceivable performance metric - most centered around hashrate and efficiency. These metrics have been analyzed in-depth and from every angle. There are chip’s-eye view reports on how the underlying technologies developed that extend from the first block mined to present day, with each milestone recognized en route.

But in our reminiscence we have missed vital context: what were the prevailing economics of bitcoin mining? Stating the efficiency of an old-generation miner is a meaningless exercise if we do not also consider how profitable bitcoin mining was in its era. An Antminer S7 has a 273 J/TH efficiency, but how profitable was it on its release?.

What drives technological advancement and how is it measured?

Hardware manufacturers submit their ASIC designs to semiconductor foundries for fabrication (typically TSMC, SMIC or Samsung). Developing and fabricating microchips is a protracted process that requires a lot of upfront capital, leaving the bitcoin hardware manufacturing industry with a high concentration of suppliers and an inelastic supply.

The more profitable running bitcoin mining hardware becomes, the more demand there is for it. As mining revenues have increased, manufacturers have been able to sell more stock, command higher prices, generate more revenue and, in turn, invest more into R&D. This fuels a technological arms race for market share.

Let us give this discussion the economic context it needs.

There are two sides to profitability: revenue and cost. As a gauge of current mining revenues, hash price proves invaluable. This simple metric represents the expected mining revenue per day per TH of hardware deployed. A function of bitcoin price and network difficulty, hash price is jointly determined by the market and the network. It is intuitive to work with and direct; revenue at any deployment is proportional to hash price (even when accounting for uptime issues, pool fees and rejected shares). It is universal: applicable to all mining anywhere across the world.

Less often thought about is its cost-related analogue, hash cost. Hash cost measures the per TH per day power cost of operating mining hardware. Unlike hash price, this metric is not universal - it is deployment specific. Its determinants are hardware power efficiency and power cost. So that we may directly compare models based on efficiency, we will assume power cost to be 0.05 $/kWh throughout this article.

Hash cost allows us to make a direct comparison with hash price. Their difference as a proportion of hash price is gross profit margin. This metric represents how much of revenue generated by mining is lost to the cost of the inputs (electricity). For context, mining company Rio Tinto's gross profit margin last year was 49% and data center provider Equinix’s was 47%.

So, with this framework at hand, we will chart the course of bitcoin mining's history – in economic terms. 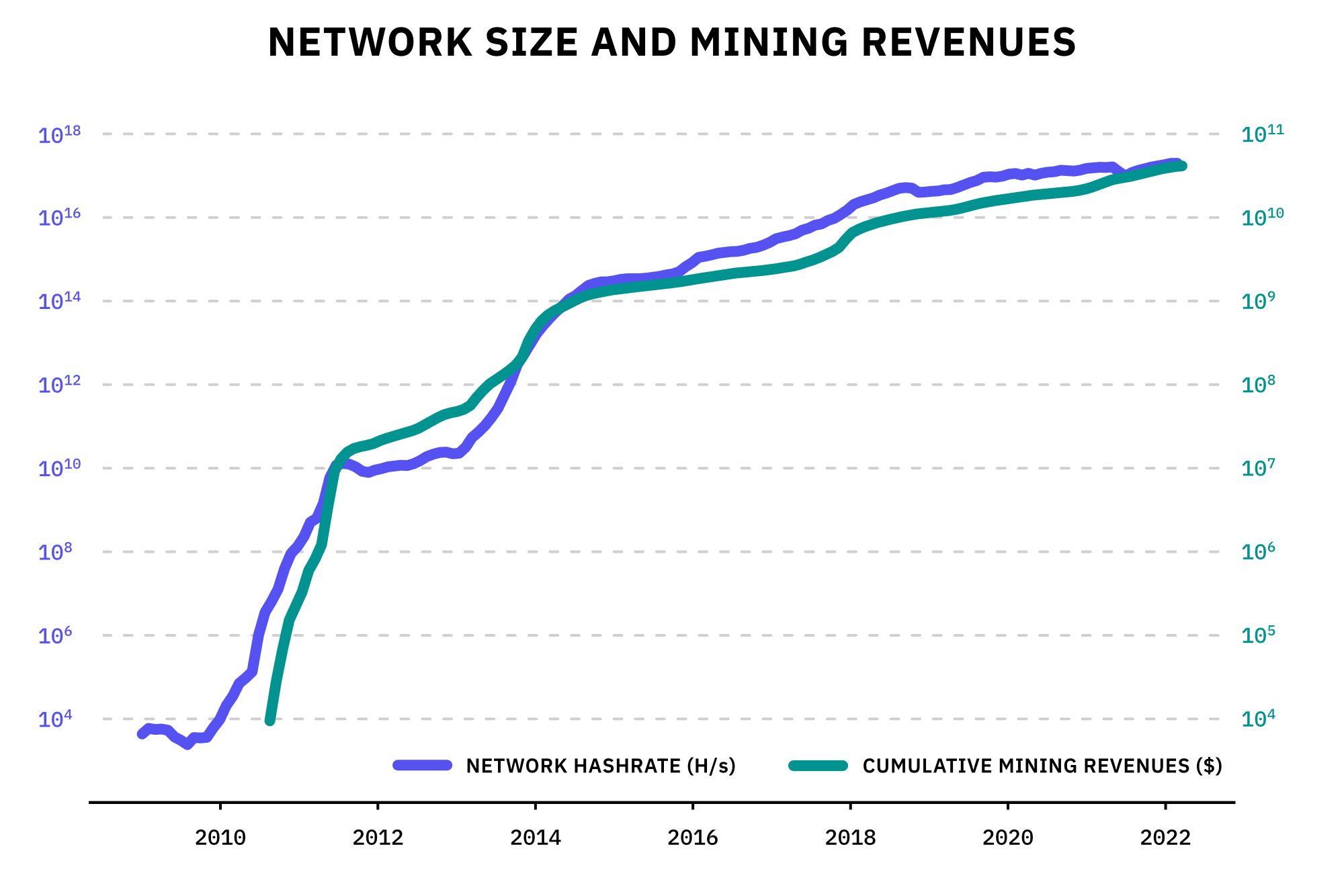 Before delving into the ASIC era, it is worth examining the events preceding its launch. When Satoshi Nakamoto mined the very first block in the bitcoin blockchain in January 2009, they did so with a personal computer. Computer Processing Units (CPUs), designed for general purpose applications, are not well adapted to computationally expensive Proof of Work (PoW) mining: the most performant among them have an efficiency of 1,500,000 J/TH and hash cost in the region of $1800 (1).

CPUs were surpassed by Graphics Processing Units (GPUs), whose superior ability to perform mathematical computations made them more suited for processing PoW algorithms, in late 2010 as bitcoin mining competition increased. Modern GPUs can achieve efficiencies of around 300,000 J/TH, resulting in a hash cost of around $400.

Growing financial incentives and increasing competition motivated a quick progression to the next technological leap. Field Programmable Gate Array (FPGA) mining becoming widespread in 2011 as the processors' customizable circuitry facilitated faster computation. Operating with efficiencies in the region of 45,000 J/TH, FPGAs offered an order of magnitude improvement on their predecessors and had a hash cost of around $50.

FPGAs were a stark demonstration of the benefits of hardware acceleration and were soon usurped by hardware designed solely for PoW mining: the very first Application Specific Integrated Circuits (ASICs). 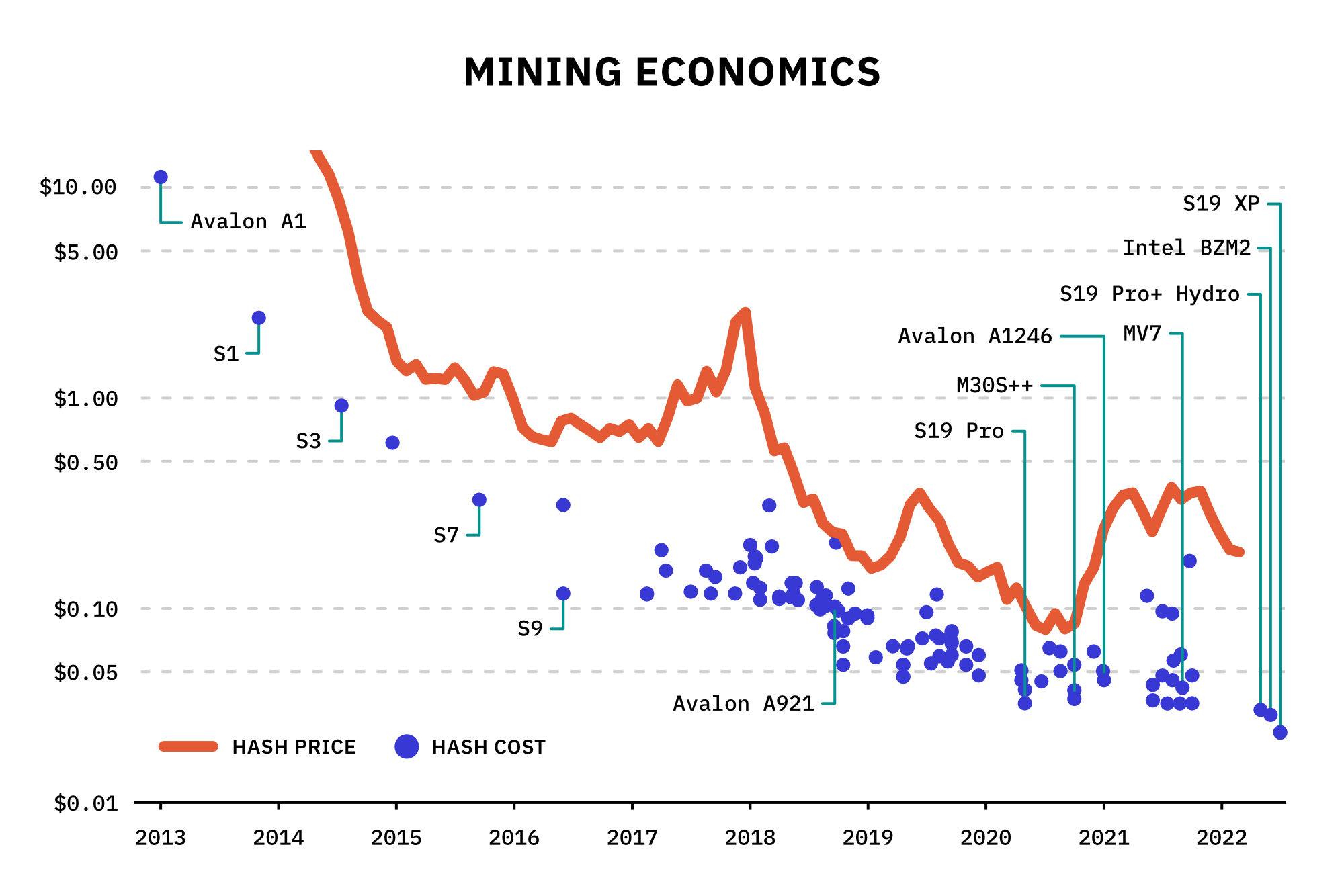 It was late 2012 and early 2013 when the dawn of the ASICs began, by which point all-time cumulative mining revenues were closing in on $100m. Led by innovators, including the American company Butterfly Labs (since shutdown by the FTC) and Chinese entrepreneur Nangeng Zhang, many rushed to release the first-generation SHA-256 specific computers. Nangeng Zhang founded Canaan Creative and released the first AvalonMiner A1 in January 2013. Bitmain was founded soon after, ahead of releasing their first-generation Antminer S1 in November that year.

When Bitmain’s third edition, the Antminer S3, was released in July 2014, its 28nm TSMC-fabricated ASICs achieved a hash cost of just under $1. Contrasted to a $10 prevailing hash price, it initially achieved a gross profit margin of over 90%. However, over the following years, that margin shrunk drastically as bitcoin price appreciation failed to keep pace with the blistering growth in network hashrate and, consequently, difficulty.

Burgeoning bitcoin mining industrialization sparked the rapid uptake of ASIC mining hardware and soon inflated network hashrate to over 10,000x its pre-ASIC era. It surpassed 1 EH/s for the first time in February 2016. Bitcoin value lagged well behind, and the ensuing hash price collapse challenged the economic viability of the early-generation ASIC miners; even new-generation Antminer S7s were unable to maintain a gross profit margin above 50%.

Released in June 2016, the Antminer S9 represented a new generation of mining hardware. Its 16nm ASICs operated with a 98 J/TH efficiency – a near 3x improvement on the Antminer S7. The resulting $0.12 hash cost meant an 84% gross profit margin upon release. At the time, TSMC’s most advanced microchips were fabricated by a 10nm process; the S9 was evidence that bitcoin miners were closing in on the state-of-the-art.

2017's bitcoin bull run saw the token's value increase by a factor of 13x across the calendar year, inflating mining profitability to levels not seen since the early ASIC era. Culminating in a $3.62 hash price, S9 gross profit margins reached 97%. This was a peak in mining profitability that has since been unmatched. Few industries globally have achieved comparable margins.

Original pioneers Canaan became the first hardware manufacturers to utilize 7nm microchips in late 2018. Through their release, the AvalonMiner A921, they propelled bitcoin mining ASICs to the cutting-edge in microchip fabrication. Shortly after, Bitmain too unveiled their first 7nm ASIC miner: the Antminer S15.

Bitcoin mining hardware continued to develop in the years following. New performance benchmarks were set first by Ebang in 2018 and then several times since by Bitmain. Prevalent models, including the Avalon A1246, Antminer S19 and MinerVa MV7, continued to incorporate 7nm microchips fabricated by all three of the semiconductor foundries.

Bitmain's Antminer S19 Pro, released in May 2020, set a new standard. It hashed at a cost of just $0.035 per TH per day. Upon its release, hash price had sunk to an all-time low thanks to a stagnating bitcoin value and, due to growing hardware production volumes, an ever-increasing difficulty. Even so, the S19 Pro managed to generate a gross profit margin of over 60% at its release. This was impressive in an economic climate in which many older generation miners were struggling to stay financially viable. 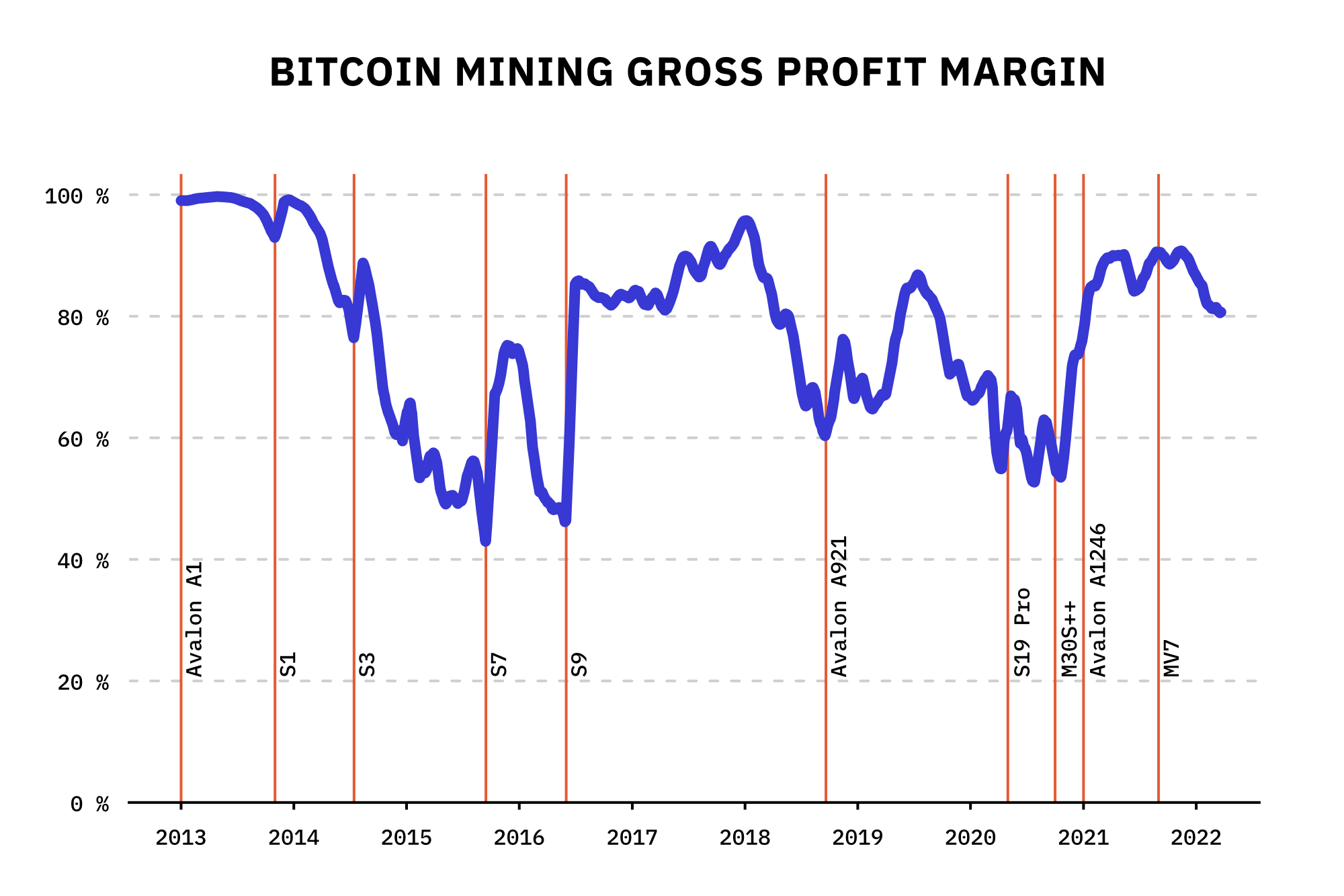 The hardware available to the market has not seen any significant technological advancement since the release of the S19 Pro in 2019. Yet, hardware prices have rocketed.

As COVID-19 wreaked havoc on global supply lines, sourcing ASICs became more costly for hardware manufacturers. 2020 saw the emergence of a global semiconductor shortage that heated up competition at semiconductor foundries. Minimum commitments meant a production run of ASICs would come in a at a cost of at least $120m. Bigger companies were able to capture large market shares and now the market is cornered by just a handful of players, each earning large profits.

Despite this, 2021 was a vintage year for bitcoin miners. The bitcoin bull run of late-2020/early-2021 pushed hash price up to $0.40 – a four-fold increase from mid-2020. By April gross profit margins were as high as 90% for new-generation machines and even many old-generation machines, including 6-year-old S7s, were economically viable with cheap power.

Ever increasing mining and manufacturing revenues catalyzed the next stage in the ASIC development story. All-time cumulative mining revenues are currently over $40bn, and 2022 is set to add around $10-15bn more to that total.

Bitmain's newest innovation, the Antminer S19 XP, will become the first miner with ASICs manufactured by a 5nm process node when it is released later this year. 5nm represents the latest in microchip fabrication at TSMC and is equivalent to the technology used for Apple's highest-spec M1 processor.

The S19 XP is set to be rivalled by semiconductor giant Intel's first serious foray into the bitcoin mining hardware market, the upcoming Bonanza Mine 2 (BZM2). Intel's BZM2 is also expected to utilize 5nm TSMC-fabricated ASICs rather than fabricating in-house (3).

Having caught up with the state-of-the-art in microchip fabrication technology, the rate of performance improvements will slow as fewer quick wins will be unearthed through R&D. So, what’s next for ASIC development?

Manufacturer sales are expected to achieve in the region of $5-10bn in 2022 (4). Let us conservatively assume that 10-20% of revenues are reinvested into R&D (5). This corresponds to an industry-wide R&D budget of the order of $1bn. For an industry that is still struggling to professionalize, characterized by small secretive teams and beset by issues surrounding IP theft, this is a significant budget.

And there is plenty of scope for technological advancement outside of the process node used for ASIC fabrication. Intel is bringing to the industry over 50 years of experience and is already setting a new standard in manufacturing. According to customer SEC filings, while not initially available to the wider market, the BZM2’s price is expected to be a fraction of the price of a S19 XP, a result of savvy production techniques (6).

This is important. We are experiencing a slow-down in Moore’s law and, eventually, ASIC efficiencies will converge on a fundamental limit dictated by the laws of Physics (7). If technological advancement slows and production capacities expand, new-generation machines will approach ubiquity and bitcoin miners will compete along other dimensions.

Minimizing costs will be increasingly important. Unfettered by short-term supply issues, network hashrate will grow to an equilibrium state. At this state, only those able to negotiate the best hardware and power prices will be able to generate consistent profits. Smaller miners will be at the mercy of the markets, relegated to opportunistic spells of mining that coincide with hash price swings.

The outlook is not entirely bleak, however. Even if a down-trending hash price continually squeezes margins against a stagnant hash cost, technological advancement in manufacturing and a diluted supplier concentration will reduce the capex costs of acquiring hardware. Currently, the mining industry is highly capex intensive; capex is a barrier to entry for new, smaller-scale entrants. Lowering this barrier promotes opportunity to a wider market and could foster resilience against bitcoin mining's creeping centralization.

The economics of bitcoin mining are dynamic. Understanding its history enables us to reason about its future. In an ever-changing industry, an accurate assessment of the future is the best way to build a long-run competitive edge.