The price of bitcoin fell as low as $25.4k late last week as markets continue to adjust to the new monetary policy landscape.

The price of bitcoin fell as low as $25.4k late last week as markets continue to adjust to the new monetary policy landscape. This marked a 17-month low, though a small rebound since sees the token's value currently at $29.9k. As we've grown accustomed to, this move mirrors stock markets – the tech-heavy Nasdaq-100 fell to a similar 17-month low on Friday.

As the dust begins to settle, long-term bitcoin bears triumphantly proclaim that 2021's bitcoin bull run was, in the end, nothing more than a product of cheap Fed-sponsored liquidity and didn't represent any underlying shift in the digital asset's fundamentals. However, the entrepreneurs and developers at the heart of crypto will be unperturbed: whatever the eventual outcome, the inflow of capital has helped to boost development resources across the industry. The seeds sown during 2021's bull run will be reaped for many years to come. And, anyway, crypto has always exhibited creative destruction – albeit on an accelerated timeline.

Another story that has cast fear over the cryptosphere is the meltdown of terraUSD (UST), a major algorithmic stablecoin developed by the Luna Foundation Guard. The coin's price stabilization procedure became overwhelmed as it struggled to keep up with a massive exodus of capital, causing it to lose its price peg and, consequently, collapse – prompting other stablecoins to test their pegs in the process. The events serve as a dire warning about the viability of algorithmic stablecoins over fiat-backed alternatives like Tether (USDT).

14-day moving average network hashrate is roughly flat week-on-week at 224 EH/s. Difficulty was adjusted up to an all-time high 31.3T early last week. Hash price, depressed by the industry's recent trends, fell as low as $0.11 before BTC's small rebound pushed it back to around $0.13. Following weeks of blistering network hashrate growth, the change in pace may reflect the fact that, at current profitability levels, the economic viability of many lower-efficiency mining operations is being tested. As it stands, breakeven efficiency for miners (with power priced at 0.05 $/kWh or above) is beneath 100 J/TH - approximately that of an Antminer S9, a model that until recently made up a surprisingly sizeable portion of global hashrate. 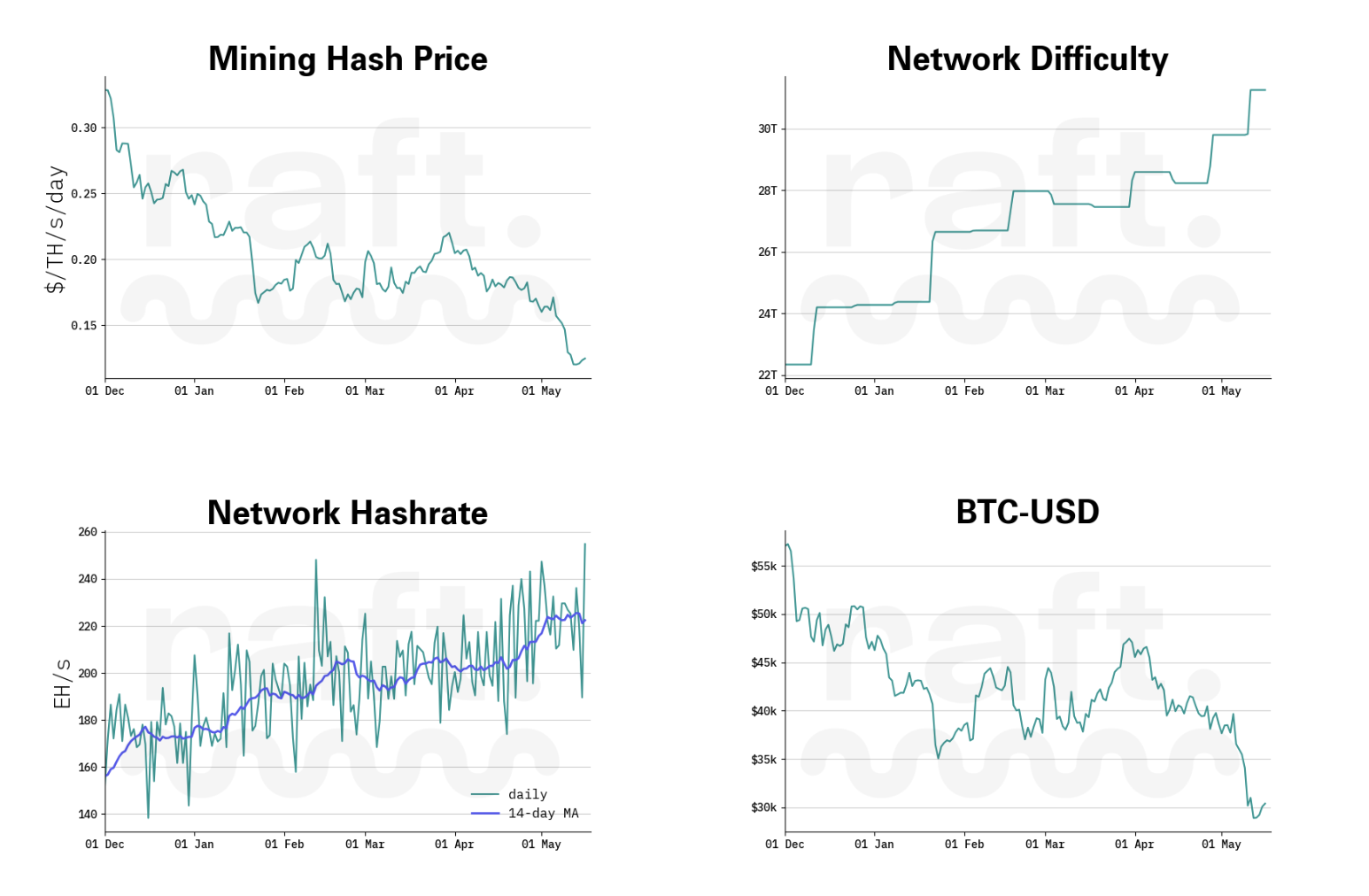